Duties and Responsibilities of a 4th Engineer

Fourth engineer is the officer in charge of engineering watch on board and maintains engine room watch independently. He shall be responsible for the safe and proper operation of machinery plants, and for the duties prescribed in STCW 2010 A-III/1.

Fourth engineer’s duties include but not limited to monitor the mechanical, hydraulic, electrical and control equipments; maintain the machinery space logs and evaluate the significance of the readings taken; and carry out engineering operations, watch keeping and engineering maintenance at operational level.

As an engineer he has some specific duties to the engine room at the same time has some general duties, social responsibilities as well.

What is purifier and why we use it on board?

As the name implies, Purifier purifies fuel oil used on board. It is a machine that separates impurities from fuel oil. Impurities can be both solid and liquid/water.

Why there are impurities in fuel oil?

Crude oil is refined in the refinery and produces various fine products.  Marine residual fuel is the last product in terms of purity in the refining process.

Besides to make the process more economic silica-alumina is used to break the heavier molecules lighter. This silica-alumina often is not possible to remove completely.

The amount of impurities depends upon the source of crude oil and quality of refining process.

(a) Explain how lubricating oil can be tested onboard.

L.O can be tested on board by using Maker’s supplied test kit , which can give the result whether it is safe for further use or not.
For L.O test , sample oil must drawn out from correct point , such as from test cock or from pump’s discharge pressure gauge connection. It should not be drawn out from , filter out let and purifier out let .
Sample oil must be taken with standard plastic tube with seal for both on board test and Lab. analysis.
END_OF_DOCUMENT_TOKEN_TO_BE_REPLACED

Q. (a) Explain why regular testing of water in auxiliary boiler is advisable
(b) How to take correct sample
(c) Discuss what factors are necessary when measured value differ appreciably from desired value in each test.
(d) Give reasons for the situation when alkalinity is found to have fallen unaccountably.

(a) For the well boiler operation, boiler water should be tested regularly and accurately. Then correct chemical treatment should be followed based on the test results for the following reasons.

– To keep the boiler water in alkaline condition
– To precipitate all scale forming , both dissolved and suspended salts in the boiler water , in the forms of removable and non-adherent sludge.
– To remove dissolved oxygen , carbon dioxide and other gases
– To produces substances which will be well below the limits for carry over , foaming and priming..
END_OF_DOCUMENT_TOKEN_TO_BE_REPLACED

END_OF_DOCUMENT_TOKEN_TO_BE_REPLACED

It is complete failure of the UMS, bridge control and data logging system has failed and the main engine is needed to run on manual control and monitoring.
(a) State with reasons six main items of data, which require to be monitored and recorded manually.
(b) Explain how a watch keeping system should be arranged to provide for effective monitoring and control of the main engine.
(c) Explain how the staff will be organized to maneuver the engine safely. State the machinery plants at which attentions are required during maneuvering.

(a) When M.E to be put on manual control and monitoring, the following six main items of data to be monitored and recorded manually.

Effects of Impurities in Fuel Oil

Scale formation and corrosion are the main two factors that determine the efficiency of the internal parts and as well as lifetime of the boiler. Badly corroded and scaled boiler can fail within very short time.

Depending upon the sources boiler water contains various types of salts and impurities. Under operating conditions all the salts comes out of the water. These salts cause formation of scale inside the boiler. The more the water contains solids and salts the more the boiler is prone to scale formation. END_OF_DOCUMENT_TOKEN_TO_BE_REPLACED

END_OF_DOCUMENT_TOKEN_TO_BE_REPLACED

Planning & Preparation of Dry Dock as a Chief Engineer 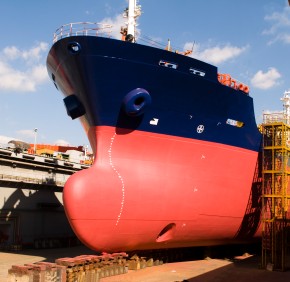 As a Chief Engineer of a vessel , he must study the time of  dry docking due , verify annual or special , and  prepare documents & defect list to be repaired , at least 3 months priority for easy and efficient supports from ship company.

END_OF_DOCUMENT_TOKEN_TO_BE_REPLACED

MARPOL Regulations of Discharging Machinery Bilge into the sea:

The rules and Regulations that govern the operation of an Oily Water Separator are under MARPOL  Annex I: “Prevention of pollution by oil”.

2.  Vessels above 1000 GT shall have an oil filtering equipment

END_OF_DOCUMENT_TOKEN_TO_BE_REPLACED

A. Handing over a watch:

END_OF_DOCUMENT_TOKEN_TO_BE_REPLACED

Servicing a motor effected/washed by seawater:

END_OF_DOCUMENT_TOKEN_TO_BE_REPLACED

The sketch shown is improve high lift safety valve . The are usually mounted 2 Nos. on a single chest. Valve , seat , spindle , compression screw and bush are made of non-corroded metal and valve chest is made of cast steel.
This valve improve than other type as because:

END_OF_DOCUMENT_TOKEN_TO_BE_REPLACED

In CO2 flooding system, carbon dioxide bottles are placed in a separate room. The requirements for location, accessibility, use and ventilation of CO2 storage spaces as per IMO are:

END_OF_DOCUMENT_TOKEN_TO_BE_REPLACED

Entries to be made in Oil Record Book as per MARPOL Annex I Requirements:

END_OF_DOCUMENT_TOKEN_TO_BE_REPLACED

Stern tube bearings serve two main functions:
1. To properly connect the propeller to the ship
2. To keep water from leaking into the stern tube (and lubricant from leaking out)
END_OF_DOCUMENT_TOKEN_TO_BE_REPLACED

Slight difference can be adjusted by:

END_OF_DOCUMENT_TOKEN_TO_BE_REPLACED

What is a Refrigerant?

END_OF_DOCUMENT_TOKEN_TO_BE_REPLACED

The following engine room spaces are very hazardous on-board the ship and therefore, a special ventilation arrangement should be provided for safe entry:

(a) CO2 storage compartment
– CO 2 compartment is situated on open deck , well ventilated and easily accessible .
– Its compartment door is opened outward.
– Boundaries between CO2 compartment should be watertight.
– Ventilation louver is fitted at the bottom near the floor , for the leaky CO2 to release to atmosphere because CO2 is more heavier than normal air.
– In some ships , exhaust fan is provided . Its suction is taken from bottom of the compartment and lead to open air deck . Exhaust system is separately provided from others.
– In some modern built ships , CO2 leakage warning alarm is provided
END_OF_DOCUMENT_TOKEN_TO_BE_REPLACED

When do the security measures come into force ?

Cochran Exhaust Gas Boiler:
1. A double-pass, vertical type, in which Exhaust gases from ME pass through 2 banks of tube.
2. Served as an efficient silencer, when the boiler is in use.
3. A separate Silencer, always fitted along with exhaust gas boiler, to be used when the boiler is generating more steam than required.
4. All or part of exhaust gases can be directed to the Silencer and atmosphere, without going through the boiler.
5. Working Pressure is around 7 bars.

1. If Exhaust Gases and Oil fire can be used at the same time, it is termed Composite Boiler.
2. In double-pass, composite type Cochran Boiler, it provides a separate tube nest for exhaust gas passage, situated immediately above the return tube nest from Oil-fired Furnace.
3. Exhaust gases from Oil-fired Furnace and ME; pass through the tubes, which are surrounded by boiler water.
4. Separate Uptakes provided for Exhaust Gases and Oil-fired Smoke.
5. Heavy Changeover Valves are fitted, to divert the gases straight to the funnel, when desired.
END_OF_DOCUMENT_TOKEN_TO_BE_REPLACED

Viscosity Index, VI:
1. The rate of change of viscosity of an oil, in relation to change of temperature.
2. Oil of low VI has greater change of viscosity with change in temperature,
than the oil of high VI.
3. For crankcase oil, VI is between 75 – 85; For cylinder oil, VI is 85.
4. Highest VI of mineral oils is about 115 and with special additives, this may be raised to about 160.
5. Hydraulic oils, used in remote control hydraulic circuits must have very high VI; otherwise erratic response to the controls can be troublesome. (Telemotor hydraulic system oil has VI of 110.)
END_OF_DOCUMENT_TOKEN_TO_BE_REPLACED

Authorised independent examination, investigation, and inspection, measuring or testing of ship structure, machinery and equipment, done and supervised by Surveyors appointed by regulatory or commercial organisations.

Their functions:
1. To ensure that ship is soundly constructed and the standard of construction is maintained.
2. Carried out Statutory Survey on behalf of the Administration regarding the ship safety and prevention of pollution of marine environment.
END_OF_DOCUMENT_TOKEN_TO_BE_REPLACED

Cylinder liner wears:
1) Normal frictional wear: Due to metal to metal contact with high surface asperities under
marginal lubrication condition.
2) Abrasive wear: Due to presence of hard foreign particles from fuel, LO, and air.
3) Corrosive wear:Due to H₂SO₄ acid attack owing to sulphur within fuel. Only 0.1% of sulphur content causes corrosive wear, like hot and cold corrosion, and the rest carried away by exhaust gas. Sulphuric acid dew point = 120΄C to 160΄C.

Hot corrosion occurs at 460 – 570΄C.
Due to HCl acid attack, because of salts in air, charge air cooler leakage,
sea water in fuel and LO.

How does emergency alarm ring?

Ans:    Continuous ringing of bell. Emergency situation is explained at the muster situation. Pattern of Emergency signal is indicated on Muster list

Water Tube type: In comparison to fire tube type heat transfer is not so so effective. Gas side cleaning is easier, sometimes fixed water spray design is used for cleaning.  Soot blowing is effective , used with medium – high pressure boiler

Q. What is Ogee ring?

Ans:    Connects the bottom of the furnace to the boiler shell plating.
END_OF_DOCUMENT_TOKEN_TO_BE_REPLACED

What is I.M.O. Convention ?

Conventions are chief instruments of IMO, being binding legal instruments, regulating some aspect of maritime affairs of major concern to IMO e.g. safety of life at sea (SOLAS) or marine pollution (MARPOL).

They are identified by name and the year of adoption by the Assembly, Such as the International Convention on the  Safety of Life at Sea, 1974.

May have detailed technical provisions attached in annexes, such as six annexes to the MARPOL convention, each dealing with a different aspect of marine pollution.

How many conventions are there ?

What is a Protocol ?

A treaty instrument which makes major modification to a Convention which has been adopted but not yet in force. The Protocol usually speeds up the Convention’s entry into force. e.g. MARPOL 73/78, SOLAS 74/78